What's that? You haven't heard the big Mod news this month?

Well, seems the Mod community has been abuzz with news of the release of the1973 Quadrophenia LP 'Director's Cut' happening today. Heck, if I didn't have real-world obligations, I'd have spent the time writing various Quadrophenia-related posts in celebration of the month of Quad-vember! I can spend several posts on Quadrophenia the movie alone ,which will happen in time, but today let's take a look at the original LP. 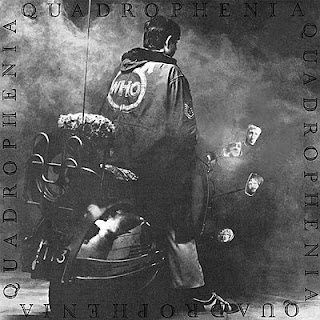 I'll go ahead and say it: Quadrophenia is probably my favorite Who LP. It's an album that, for me, has really stood the test of time and sounds as great today as it did when I first heard it as a teen... which is weird. Based on the album's sound, I should not have liked this album at all at that time. I was still young, a bit narrow-minded, and put off by anything 'heavy rock'-related. I was into new wave, punk, power-pop, soul and r&b with my taste of jazz limited to a Columbia classic jazz compilation and a cassette tape of Kind of Blue. I HATED strongly disliked anything post-1967 and pre-1976.

My first real exposure to Quadrophenia, aside from my father telling me I had to see it to learn more about Mods, was a purchase of the movie's original soundtrack during a San Francisco visit when I was about 16 years old. We were staying with my uncle and I remember putting the 2-disc album on with headphones (so as not to disturb the adults' conversations) and kind of liking the Who songs. I listened closely for any Mod-related lyrics and got a little excited when I did hear them. But what I loved most about that LP were the actual '60s numbers, especially those by the High Numbers, the Cross Section, James Brown, and Booker T. Those would be the songs I'd play over and over again. 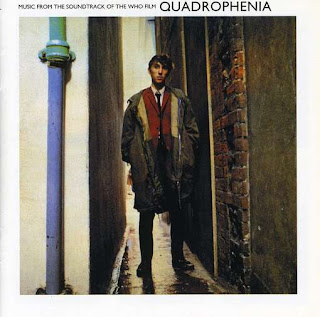 At this point, I still hadn't seen the movie... remember, these were the days before OnDemand, Netflix streaming, and YouTube. But once I did, well... let's save that for another time. Okay, yes, I became obsessed. That obsession grew once I found a copy of the original 1973 Quadrophenia album, which included the booklet, about a year later! Despite the 'hard rock' operatic sound of the album, I played it constantly. (Okay, sure, I probably opened my mind to this album mainly because of the Mod on the cover.) The first song alone, 'The Real Me,' captured all the teen angst I had at the time. But you throw in songs like 'Cut My Hair,' 'Helpless Dancer,' 'Sea and Sand' and 'I've Had Enough,' and WOW-EE! Just the type of album I was needing... an album that was talking about what it was like to be young with the whole world against him. I leafed through the booklet's photos, absorbed the liner notes, and ate up all the lyrics, especially any Mod-related ones.

And yes, Jimmy the Mod became a kind of hero to me. I admit it. We all go through angst in different ways as teens. Those days for me consisted of going to school, not relating to many people, coming home, shutting my door and delving into music. I had no Mod girlfriends, no full-on Mod scene, and no Mod events I was aware of to attend. Heck, I lived in La Puente, CA where many of my neighbors had become full-on cholos. The loneliness and lameness that I thought Jimmy felt... yup, I was there too. (Oh, to be young again.)

I thought Jimmy was the Mod be-all and end-all.  The parka, the short hair, the suit, the sneakers... well, maybe not the sneakers. But he was the guy who I thought represented all Mods, especially me. Yes, friends, I too felt like I bled Quadrophenic. (...groan.)
I'm looking through the Quadrophenia booklet now and remembering how those photos made me think about how much I thought our lives were so similiar. We both lived in dreary towns; we both had a hard time relating to our elders; and we both grumbled when taking out the garbage. Of course, we weren't completely alike: Jimmy's parents had to endure the horrors of WWII, he was allowed to have pin-ups of naked ladies on his walls, and... waitaminute, WHAT?! 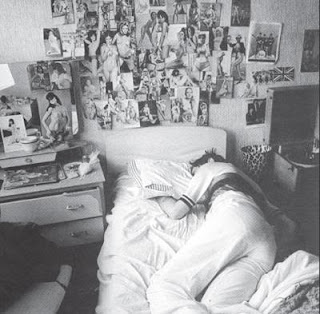 Jimmy's parents let him put up photos of nude women on his walls? And they let him go out and party and come home late in the night? And he repays this by throwing rocks through car windows before overturning them? 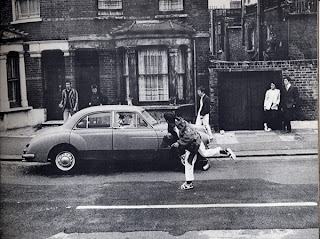 Yeah, it around the time of realizing this stuff that I first grew away from the idea of Jimmy as any kind of 'hero'.

I'm an old man now (my wife disagrees, bless her heart). I don't relate to Jimmy the Mod. And I don't see Jimmy as any sort of Mod icon. Don't get me wrong, he's a great character that teens can identify with, especially if you're a teen who thinks you have troubles. I was there once. Angst... it's a heavy thing. But I look at these Quadrophenia photos and I just see a Mod kid who doesn't dress that well and was allowed to have naked photos of women on his walls. Plus, if you're gonna have a Mod icon, why not shoot for the best?

I just finished reading the Quadrophenia issue of Mojo and paused at how Pete Townsend described Jimmy: "So, Jimmy is one of the children, he's one of the numbers. He's not quite down there with the tickets." Well, let's ignore the Mod terminology Townsend's using here and get to the point... according to Pete Townsend, Jimmy wasn't that slick! He was a troubled kid toward the bottom of the Mod totem pole.

Dude was a 'number.' Straight from his creator's mouth!

Well, what's the point of this whole write-up? I was once an angsty Mod teen, once thought Jimmy was cool, and STILL really dig the original Quadrophenia LP (and not just because it's got a Mod on the cover). Speaking of which, excuse me while I put that album on before ordering the 'Director's Cut'! 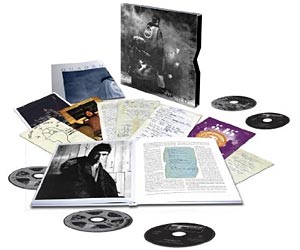