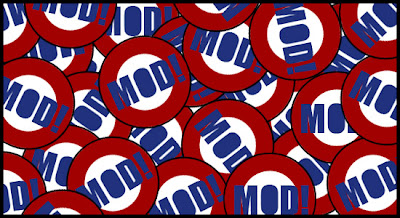 Y'know, judging by the amount of times I use the term "mod" in this blog, you would think I walk around all day constantly calling myself a 'mod' in real life. You'd think I'm one of those people who uses the term 'mod' every chance I get:

"Hey guys, I'll catch you later... I'm about to mod up." "Y'know, as a mod, I don't really like those skeletoe shoes of yours." "Ohhh, the life of a mod is so Mod-darn hard, I just want to mod mod mod off into the sunset."

GAH! You say a word enough times and it just starts to lose meaning to you.

You're not going to believe this but I don't really refer to myself as a 'mod' in real-world away-from-the-computer conversations. Oh, I know what I'm into and all, and I identify with it, but I don't go around being all explicit about it.

Yeah, I know... based on the fact that the 'M,' 'O,' and 'D' buttons on my keyboard are worn away to nubs, you'd think otherwise. Look at the title of this blog, for heaven's sake! Heck, I use the word 'mod' so often on this blog, Paolo Hewitt's probably getting ready to cash in on the royalties he thinks I owe.

But, in real life, people know what I'm into, I know what I'm into, and that's pretty much all that's needed. I don't need to emphasize any label with people. In fact, in general, when people have asked me what I'm about or what I am, I don't think I've ever really answered, "I'm a mod." At most, I'd tell them, "Oh, you know, I'm into moddish stuff." Or, "Y'know, the sixties." Because, really, who wants to get stuck in that conversation?

Others are different. They love the label and want others to recognize that they fit within that label. Some people go so far as to use other labels/names like 'tickets,' 'faces,' 'ace-faces,' 'modettes,' 'numbers,' blah blah blah. Man... what's the point?

Although I love the culture and what the term itself stands for, I don't peg my existence on it. My decisions aren't based on 'What would mods do?" In fact, there are probably a ton of you who think I'm NOT a mod at all, for various reasons.

And who am I to argue? Heck, I'll even go ahead and give you the Top 10 Reasons Why I'm NOT A mod:
So there you have it... the many reasons why I might fall out of the mod definition. I just don't live my life through a 'mod' prism. My decisions or interests aren't based on what is or isn't 'mod.'

See, I don't like soul music, 3-button jackets, chisel-toe shoes, and vintage scooters because I'm a mod, but rather, maybe, just maybe, I'm a mod because I like all those things. I don't know and it really doesn't matter. You can call me a 'mod,' you can call me a retro guy, or you can call me a doofus for all I care. Whatever you call me, whatever I call myself, none of it changes or affects my aesthetic or list of interests.

And that's why being called a mod isn't as important to me. I still dig it and will continue to exploit use the term on this blog, for the ease of discussion. Heck, I'll even be protective of it when I see some bunk stuff out there using the term. I love what the term represents, but I don't limit myself with it. Hey, like the proverb says, 'Know thyself.' Me, I know who I am regardless of the label.

Whew... now that I got that outta my system, I feel so much more liberated. Now I think I'll go put on a Howard Tate LP, iron up my tab-collar shirt, and go downstairs to pay my old scooter a visit. And after that, who knows? Maybe I'll go hang out with some rockers. 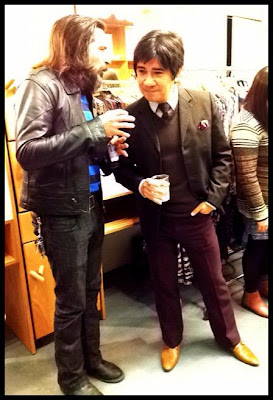