It's the phrase coined by Pete Meaden that most Mods, I'm sure, say they live by. Some might say it's the simplest definition of 'Mod'. Yeah, I kinda like it myself. It's simple... yet open to interpretation.

When I was younger, I didn't quite understand it. What was meant by 'clean living'? Being drug-free? Being hygienically clean? Being unsloppy? Well, at the young age I was at, I chose to interpret it as being clean (as in taking showers), not sloppy, and fastidious. And I saw the 'difficult circumstances' in a financial sense.

I was a relatively poor kid who saved money to buy cheap, used clothing to have tailored to look as Moddishly hip as possible. I didn't always succeed, but that was what I saw 'Mod' as being about. I used to hear about other guys, around my age, who did have money (usually from wealthy parents) and either went out to buy the best Mod stuff possible or have it tailor-made. I didn't understand the 'difficult circumstances' people like that lived under. If you had the money, it was easy to jump into a certain look. Some of us had to work a little harder, with several mis-steps along the way, towards that end.

I saw guys like us (who didn't have their parents' wallets to supply bespoke threads) more in line with the original 1960s Mods... young guys who were willing to sacrifice what little they had for a better appearance on their own terms. For me, no matter how broke or poor I felt I was, I wanted to look my best. That was probably the biggest attraction the Mod look had (and still has) for me.

Well, thanks to some articles DJ Soft Touch posted recently, I think I've learned what real "clean living under difficult circumstances" is and it's been happening in the Congo for many years. I thought it was tough living as a poor kid in La Puente, CA knowing more about gangs than anyone should (and it wasn't much, really) but I wasn't living in a war-torn Congo.

The Sapeurs are a subculture of immaculately-dressed men in the Congo who can put most Mods to shame with how sharp they look. Despite living with little money, bare resources, and civil wars, these men manage to walk down the streets dressed in beautiful, colorful, dandified clothing as a call for and show of respect. And guess what? They're dressing this way, during the day, with no Mod all-nighters or weekenders to go to!
Much like Mods, they pay vast attention to detail. According to the Messy Nessy Chick blog, these details include wearing a maximum of three colors in each outfit and leaving the bottom cuff buttons undone. Also, they stress non-violence through mottos like "Let’s drop the weapons, let us work and dress elegantly." And tell me if this sounds familiar: one of the early sapeurs, Papa Wemba, a famous singer in Zaire, has been quoted as saying, "Don’t give up the clothes. It’s our religion." 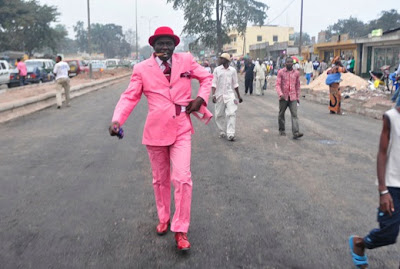 Let these guys be an inspiration to you. From the cuts of their suits to the beautiful colors they put on display, these guys truly live clean under difficult circumstances! And remember... for these guys, it's just another Tuesday.

And keep an eye out for the Daniele Tamagni book, Gentlemen Of Bakongo Book: The Dandies Of Sub-Saharan Africa.
Posted by Supermod at 7:11 AM