Alright, as much as I hate to admit it, summer is upon us. I'm sure I've said this before, but I just don't do well with summer... or hot weather, in general. (What do you think spurred my move from Southern California to Northern California?) However, summer is a great time to finally bust out a nice madras suit jacket!

For those of you who don't know (and are having a hard time connecting to Wikipedia), madras is a lightweight cotton fabric, named after the Indian city of Madras. As the Ivy Style blog illustrates, madras was imported into the U.S. as far back as the turn of the century, but once Ivy League students latched on to the fabric in the middle of the century, its popularity grew more and more, despite the bleeding quality of the fabric (which became a large selling point). Although madras can come in plain colors, stripes, and other assorted patterns, the plaid design is probably the most recognizable.

This look was an early influence on the Modernists of the late '50s/early '60s which continued to spread to the point where madras jackets could be seen on many English youth (and bands) throughout the early to mid-sixties. Georgie Fame and the Small Faces are probably some of the more famous examples of the madras jacket in action, but here are some more:
﻿﻿﻿
Now, the first time I ever really noticed a madras jacket was in the inside sleeve of my very first Small Faces CD, From the Beginning: 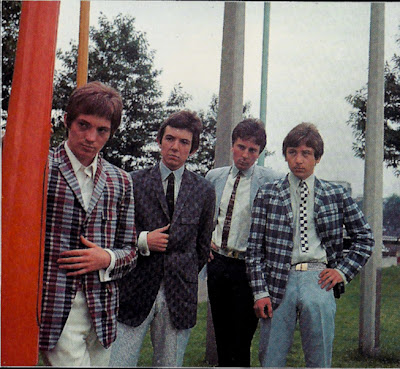 Yes, my eyes were a tad blinded when I first saw this photo, but it was an image I kept turning back to, curious as to how wild their whole look was, while still keeping within the ol' suit-and-tie realm. Although Ronnie Lane's jacket fit my tastes more, the plaid madras of Steve Marriot and Kenny Jones totally challenged my perceptions of a 'mod' look back then. It was a loud look but, as a teenager, that's what I was after. Would I have worn a checkered tie with a madras jacket like that? I can say now that I probably would have avoided that look... but the 16-year-old me, if truthful, would have totally tried it. Good thing none of those pieces were anywhere near me!

A few months later, I was definitely sold on the madras jacket. In June of 1991, I went to my first ever 'Mod' show and saw a band that helped blow away my power-pop, revival leanings: The Loved Ones. (But, that's a story for another time.) Not only was I taken with their mid-sixties R&B sound (I still remember them covering 'I Just Want To Make Love With You', one of the few R&B songs I actually knew from a cover done by The Rolling Stones) but their outfits on stage were in stark contrast to just about everyone in the audience. All around me, people were dressing in black, navy, or dark brown suits, but up on stage were these guys:
﻿
﻿And the outfit that most opened my eyes was that light-brown plaid madras blazer! I had to admit it... he looked more styling than either of the Small Faces in the previous photo. There, in front of me, was a loud Mod look done so right, that eveyone else in the crowd, including me, looked just so wrong. Turned out, this was a look that other Berkeley Mods had adopted. When my buddy, Juan G., picked up a copy of the Loved Ones debut 45, further proof of the slickness of the madras jacket was demonstrated:
By the time I moved to the Bay Area and met up with these guys, well, I must have gone on and on about how much I loved that light-brown madras jacket. For me, it was a reminder of the first Mod show I ever attended and a symbol of the look that really increased my interest in Mod clothing. Well, eventually, that jacket (along with others over time) was handed down to me and still remains in my closet, waiting to fit again.
John Kent passed on his jacket as well and I still continue to appreciate it to this day. Here's one of the only photos I could find, wearing that jacket:
As I mentioned previously, plaid isn't the only variety of the madras jacket. Here's a shot of The High Numbers' John Entwistle in a striped madras for you: 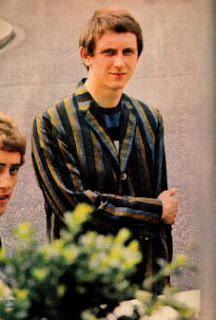 And here are couple of batik-patterned madras jackets you can find around:

I'm still a huge fan of the madras jacket and love that many others are into the look as well. As I got older, there was a brief moment when I thought they might be too loud to get away with... but then, I regained my senses. I don't care how loud they are... the jackets are the way to go, especially now that the weather is perfect for them! Here's one of my favorites, worn during our trip to Europe last year:﻿
﻿If you look around the internet, you'll see that the madras jacket is really coming back and not just for fans of Mod styles or the Ivy League look. And my guess is that you'll be seeing more and more madras jackets, thanks to that show of shows: Mad Men.