We all have to start somewhere. After all, no one is born with a paisley tie, french-cuff shirt, slim-fitting jacket, well-creased trousers, argyle socks, and almond-toed shoes. And boy, let me tell you, I went through some doozies on the way to getting my act together!

So, today, I turn the Mod Gone Wrong focus on myself as I go through my Top 5 Mod Growing Pains (in no particular order):

1. New Wave Hair
When I was in high school, I never ever wanted to be an 'over-nighter'... y'know, those kids who showed up to school on a Friday in a Depeche Mode t-shirt and returned on a Monday in a shaved head and flight-jacket covered in ska pins.  To us, people like that were poseurs, the worst thing you could possibly be called in high school!

So, although I was already learning everything I could about Mod life throughout high school, I knew I couldn't just show up, cold turkey, in a parka with Mod badges after all those days in Smiths t-shirts. People would think I was crazy! No, I wanted my transition from new-waver to Mod to be very gradual. I wanted it to happen step by slow step, starting off with a Jam t-shirt here, a Specials pin there, until eventually, I had my look down complete... over time. Unfortunately, as a result, photos like this exist: 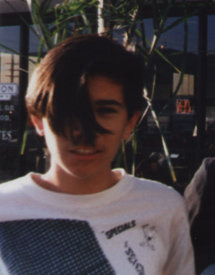 So, in my attempt to avoid poseur-ism, I most likely gave many people the idea that I was a poseur, what with walking around with new-wave/skater hair and a ska t-shirt. Still, even by this age (15-16), I knew what the what was with The Who, The Jam, and 2-Tone! I just wasn't ready to express it fully quite yet. (By the way, this guy knows what those days were like!)

2. Ill-Tapered Sta-Prest
I'll never forget my first experience with a tailor, who wasn't my mom. Early on, in my first year of college, I found a couple of vintage sta-prest at a local Goodwill: a navy pair and a white pair. Oh boy, was I excited! Only problem was that I thought they were too wide. (Looking back, they were probably the width I wear my pants these days!)

Luckily, near my dorm, I found a cool storefront with a sign that said 'Jim the Tailor'. I knew Jim would know what to do. So, I took my two pairs of pants and asked him if he could taper them to about 6.5 inches wide... yes, 6.5 inches! (If that sounds impossible, then maybe it was 7 inches... either way, too tapered for my tastes nowadays!) After waiting about 2 weeks, I went back to pick the pants up. Jim told me he was running behind and asked if I'd come back in another week. So, I did. Jim said they still weren't ready. So, I waited another week. Was this how long tailoring took? I didn't know and had no real experience with this.

Finally, after that other week, I went back and this time Jim asked me to come back in another 2 days. Now, I was getting irritable. But I waited 2 days, came back and the pants were finally ready! I brought them back to my dorm and tried them on, ready to strut out onto the avenue in my new Mod trousers. But something wasn't right with either pair... not only were they tapered from the knee down, but, well, he only took them in on one side and ironed in a new crease to erase the old one! Don't know what I'm talking about? Here, allow me to illustrate: 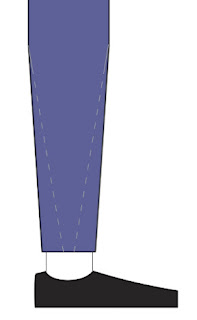 The dotted line represents the original sta-prest crease. He tapered the pants in from one side only so that I had to walk around with mixed-up creases on each pant leg! Yes, I still wore them, and my Berkeley friends were nice enough to ignore the travesty. This was my first tailoring experience and a hard lesson learned.

3. Too Big Bowling Shoes
Early on, I was dying to get a pair of bowling shoes, just like I had seen The Jam wearing. I had no luck, though, whenever I went thrift-shopping. But during my first year of college, a friend handed me down a couple of his old pairs. I felt like I had just conquered another Mod hurdle: I finally had bowling shoes! 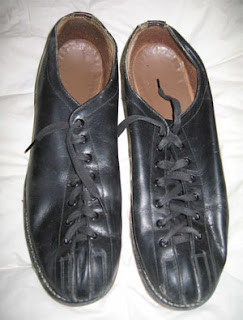 Unfortunately, they were about 2 sizes too big! Still, I wore them, flappity-floopin' throughout my school day. What made them look even more ridiculous was the fact that I wore them with my high-watered, too-tapered, ill-creased sta-prest! But really, it wasn't like I had Ebay back then to find a pair of bowling shoes. And it wasn't like there were Mod companies then making bowling shoes, not for bowling, but for Mod purposes only. So, I walked around, looking like a clown and wearing them out to the point that the soles started to come undone.

My friends, this is how I started.

4. DIY Tab-Collars
Tab-collar shirts were just as hard to find back then as they are today. They were my most sought-after target (no pun intended). With no luck finding a real tab-collar shirt, I picked up on the old idea of taking an item of clothing and, if it wasn't 'Mod' enough, making it 'Mod' yourself. DIY tailoring, if you will. For instance, I was able to make my own shirts with button-down collars just by sewing buttons over the collars and onto the shirt. Sure, the buttons couldn't function, but they looked cool!

After reaching some success with my DIY button-down collars, I felt I was on a roll, so I decided to move on to making my own tab-collar shirts. Friends, I don't mind sharing my secret if you're looking to do this at home, but I wouldn't suggest it.
I only actually succeeded doing this with one shirt, one with a light-brown check pattern. Luckily, it wasn't vintage. Oh sure, for a while, I was actually able to button the 'tabs' together, but after about 2 wears, the tabs began fraying! Tab-collar shirts don't look cool when fraying tabs start sticking out from under your tie.

5. Crew-Cut Hair
In my senior year of high school, I was reading about some of the Mod hairstyles and the one that stuck out in my head was a 'French Crew.' I really had no idea what that meant at the time, though. But after studying haircuts I had seen in Modzines and certain LP covers, I noticed that many of the Mods had really short hair, but long enough to at least comb a little. For instance, in the shot of The Chords, take a look at the guy on the far right: 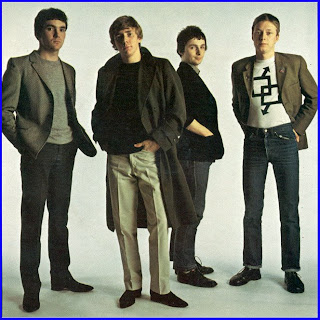 That was the hairstyle I was after, what I thought was a 'French Crew.' So, I went to a local hair stylist, without a picture, and asked for a 'crew' cut. The barber looked at me and said, "Are you sure?" Of course, I was sure! I was walking in with 'normal, short hair, and walking out with 'Mod' hair. Then he asked what 'clipper' number he should use: 1, 2, 3, or 4? Aw heck, I didn't know... 4 sounded good since he said that would leave my hair slightly longer.

Next thing I knew, he was clipping off all of my hair! When he was done, hills of hair were at my feet and I was left looking like a skinhead, the one thing I was not and never have been. What's worse is that this was at a stage in my life when I was still wearing a burgundy flight jacket with ska patches and pins.

For a portion of my senior year, I was pretty much walking around as a rude-boy/skinhead thanks to this mess up. Gradually, it grew out, but I learned something else about my hair. It was so straight that as it slowly grew longer, I began to look more and more like a monchichi, something a female classmate liked to mention whenever I was around. 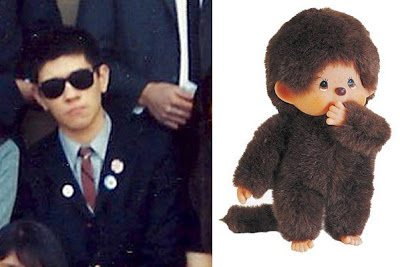 Eventually, my hair returned to normal, but for that brief period, I was mistaken too often for a skinhead... not a good thing when most people had different ideas of what a skinhead was. Heck, I remember getting hassled one evening by a bunch of guys calling me White Power. Y'know, me, the Mexican kid walking back from the local library, after a long night of studying, with my two Asian classmates.

So, there you have it... my Top 5 Mod Growing Pains. Oh, there are probably more, but for now it just goes to show that we all have a hard road to travel before reaching that Mod goal.

Your turn: What were some of your early mess-ups?
Posted by Supermod at 8:46 AM