In Defense of the 3-Button Jacket

There was a recent discussion on the We Are the Mods Facebook page (fast becoming the #1 source of Mod Male post ideas) that I found pretty interesting. The heart of the discussion was the idea that there were no rules when it came to the Mod look and that there was no "mythical 'Mod Rule Book'" (although many people do follow the one written by Richard Barnes).

Now, I agree with We Are the Mods... to a point. I think too many people get caught up, pretty much, in what was written in that Mods book. And don't get me wrong, it's a great book. For many, it was their first look into the details of that original Mod world. But even I think some people take it too much to heart. (I'm sure many Mods today don't like the Beatles because of page 13.) Heck, even I took a lot away from it since, at the time, it was the largest source of Mod info you could find.

But over time, you learn what was done in the '60s, you take what you love away from it, and then you use it as a base to try to move forward. I think that what was done in the 1960s provided a great framework within which many Mods today work. So, sure, there are no real rules to this thing, but there is that framework which really helps define the style and set it apart from the regular Joe walking down the street in the retro style he just learned about from GQ.

And at the heart of that framework is the 3-button suit. Go ahead, say it. "Well, Mr. Mod Male, I thought you disliked Mod clichés?" It's true, I do dislike the clichés... y'know, the targets, the parkas, the Jam shoes, the Union Jack lapel pin. But I see the 3-button suit jacket in a slightly different light and I'll tell you why.
I grew up in the '80s and spent my adolescence in the early '90s. When I was getting into the Mod thing, all I had to go on was my father's description of Mods: "Well, kid, Mods in the 1960s wore suit  jackets with thin lapels and thin ties." For whatever reason, I was taken with that description, despite the fact that I had zero experience with suit jackets to begin with. The number of buttons on the jacket front didn't even enter into my Mod equation. For me, it was a lapel thing.
Well, the very first suit jacket I had to start with was a simple 2-button number given to me by my friend who took it from his older brother. It was navy blue with black pinstripes and a single vent up the back. Nothin' Mod about it, but I didn't care... I had a suit jacket. My only issue with it was that the lapels were slightly larger than I thought they should be. After thinking about it for a bit, studying it, I realized what I needed to do. So, I asked my friend if she could sew a fake third button on top and stitch it through both breasts of the jacket (we didn't have button hole-making technology), since that would thin out the lapels. Once I got this jacket back, I pulled it over my head (no working button after all) and voilà! It looked perfectly Mod to me! And it was that 3rd button that made it stand out.

Keep in mind, in the '80s and '90s, typical suit jackets had large lapels and 2-button fronts. You couldn't escape them! (And there still pretty popular today, especially in the business world.)
So, for me, the 3-button suit was something that, right off the bat, set you apart from all the other suited-up Joe Schmoes. I became less concerned with lapels than I did with the number of buttons on the jacket (not to say I still didn't prefer the thin lapels).

As time went on and I began to understand jacket construction more, I realized something else about the 3-button jacket: it tended to create a high-cut look (with less shirt and tie showing), which to me seemed very streamlined. Of course, my goal was to get really enveloped by my jacket, so 4-button fronts were highly sought-after by me (but rarely found).

But then, I began to question my own fascination with the 3-button look. I had a friend who, one day, showed up to a club in a 2-button jacket. He saw me looking at him funny and cut me off at the pass, "Yeah, it's two buttons, but I dare you to find a cooler-looking jacket." He was right! There was something about his jacket that still had a very Mod look, despite only having two buttons. And this is when I learned that even more important than the size of the lapels, even more important than the number of front buttons, was the height of the button stance. The buttons of my friend's jacket were high up on the front so that his top button was about as high as the top button on my 3-button jacket. You see, he was wearing a vintage 1960s 'bumfreezer' jacket!
﻿These days, I still love the 3-button jacket... it's just my thing. But, more importantly for me, is how high that jacket buttons up. A few years back, I walked into a Zara shop in San Francisco and was excited to see them stocking up on 3-button jackets. Oh man, finally, I could find sharp contemporary suits with a Mod look! But when I tried on the jackets, something just didn't look right... they buttoned too low. What was the point in a 3-button jacket if it buttoned as low as a regular 2-button jacket?
Many Mod types to get hung up on the whole 3-button thing. Hopefully, though, they aren't choosing their jackets with only that in mind. As Steve Harvey here shows, 3 buttons does not a Mod suit make.
And he's got some of the details here that might fool a layman (pocket square, ticket pocket, mustache). See, you gotta keep in mind other details of the jacket such as that button stance, the lapel size and shape, the shoulder size, the armholes, the vents, and, most importantly, the fit itself. All of that is what sets a Mod suit look apart. Steve Harvey's a big guy and tends to wear suits you can either swim in or play quarterback in. Heck, he's one step away from making sense! 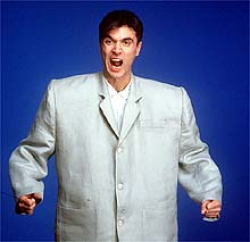 So, is the 3-button jacket a Mod cliché? Well, it definitely can be I guess. Take the typical Merc jacket that most 101 Mods would be happy with. Tonic material? Check. Ticket pocket? Check. Side vents? Check. Thin lapels? Check. 3-button front? Check. Overall, there's nothing wrong with this, but it can be a cliché look when there are 5-10 other Mod dudes standing around you, wearing the same exact suit (albeit in maroon or navy).
What I like is when people take the 3-button framework and expand upon it. Maybe they'll widen the lapels a bit or make those lapels rounded instead of pointed. Maybe they'll use a reverse peak lapel. Maybe they'll use a 2-button front but raise the stance. Maybe they'll use a 3-roll-2 jacket and keep the top button unbuttoned.
Or, like DJ Warren Peace probably prefers, maybe they'll ignore the 3-button front altogether. For instance, did you catch Martin Freeman on the Colbert Report a few months back? He was wearing what looked like a single-button jacket with wide peak lapels. Personally, not my thing at all. However, I was still struck by how slick he looked thanks to the details that brought it all together, from the pattern of the suit, to the tab-collar shirt (with club collar), monochromatic red pocket square, and red tie, all of which combined very well. He wasn't wearing the standard 3-button number, but still came of as very dapper in a Mod way. Martin Freeman, kudos to you for challenging the 3-button look.

So, yeah, there really are no rules to this game, but there is a framework on which one could base his look. And if you prefer rules, then learn what those perceived rules might be... that way, you can learn to break them in style.

Me, I'll stick with my 3-button look. After all, I've been lucky with a good collection of 3-button hand-me-downs I've received from friends over the years. On that note, Faces, take it away!
*
Posted by Supermod at 9:24 AM